The Next Pope: What Happens Now?

Charles Keenan is a PhD student at Northwestern University. His M.A. thesis was entitled "The Right to Reform: Popes, Councils, and Cardinals in the Early Sixteenth Century." 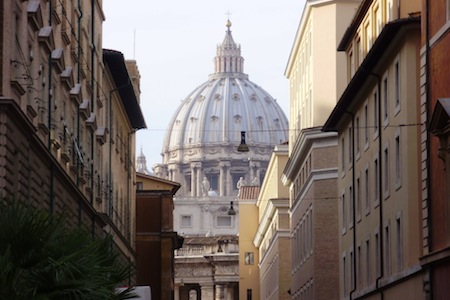 In a surprise announcement this morning, Pope Benedict XVI announced his intention to resign the office of the papacy effective at 8:00 p.m. on February 28. Per the Vatican's official announcement, Benedict declared to the cardinals gathered in consistory that given his advanced age (the pope is 85 years old), he feels he lacks the physical strength to continue fulfilling the duties of the papal office.

The announcement took the world, including those at the Vatican, by surprise -- a "bolt of lightning from a clear sky," one cardinal reportedly remarked. Papal resignations are not unprecedented, though they have proven extremely rare. Along with death, resignation is one of the two ways the papal office can be vacated according to canon law. Benedict will be the first pope to resign in nearly six hundred years, making his announcement all the more remarkable.

Only a handful of men have ever chose to step down as the leader of the Catholic Church, and Benedict XVI will be joining fascinating company. Of the seven other popes who can be said to have resigned (the number itself is only approximate), three have been recognized as saints, two were martyrs, and three were not the only men claiming to be pope at the time.

The first pope to resign was St. Pontian (reigned 230-235). Under the persecutions of Christians carried out by emperor Maximus the Thracian, Pontian was exiled to the island of Sardinia, but chose to step down as bishop of Rome before being exiled. He died on the island, the first Roman bishop to be martyred since Peter.

St. Silverius (r. 536-537) stood in the middle of the power struggles between the Byzantine empire and the Ostrogoth rulers of Italy. The Byzantine Empress Theodora eventually succeeded in forcing Silverius to resign in favor of her own candidate for the papacy, Vigilius. Silverius was exiled to a Mediterranean island and likely died there of hunger.

John XVIII (r. 1003-1009) possibly resigned the papacy toward the end of his life to spend his remaining years as a monk, though there is little evidence to say with certainty.

Easily the most notorious pope to have resigned was Benedict IX, who was elected at the age of twenty, or possibly even younger. Living an openly dissolute life by all surviving accounts, Benedict was driven out of the city of Rome at one point, and after returning with the help of the Holy Roman Emperor, he was persuaded to resign the papacy for a sum of money. The man who offered the money to Benedict then became Pope Gregory VI, who in turn resigned after being accused of buying the title. Meanwhile, Benedict decided that he would like to continue ruling as pope, despite other claimants to the office. The Council of Sutri (1046) declared Benedict and these others deposed, but Benedict persisted in claiming the title of pope for himself until his death. As a result of all this, Benedict IX is the only pope who has reigned in three distinct, non-consecutive periods (between 1032 and 1048), losing the title twice.

St. Celestine V had been a simple Benedictine hermit when he was chosen by the College of Cardinals to become pope in July 1294. Celestine only reigned for a few months, abruptly claiming in December 1294 that he had the right to resign the papal office, and then doing so. His successor, the more famous Boniface VIII, upheld this right to resignation, and it is from this point that we can identify a formal, legal process by which a pope can resign.

The most recent example of a pope to abdicate was Gregory XII, one of the three men claiming to be pope during the Great Schism. Gregory agreed to resign the papacy in 1415 at the request of the Council of Constance, and lived out the remaining years of his life in relative quiet.

Benedict XVI's announced resignation stands in stark -- and undoubtedly more peaceful -- contrast to these earlier examples. Most importantly, Benedict would be the first to resign the papacy on account of his health. Following the long decline of John Paul II's health, some have voiced concerns that there is currently no provision in canon law to deal with a physically incapacitated pope. Even obtaining a resignation in that circumstance would be problematic, since canon law (canon 332 § 2) states that any resignation must be "made freely and properly manifested." There is no mandatory "retirement age" for popes, even though bishops are encouraged to resign at age 75, and cardinals lose their right to vote in conclaves at age 80. But perhaps Benedict wishes this to be a precedent for future popes to consider.

Despite advance notice of the pope's resignation there will still be a period of transition where the Catholic Church is without a pope -- the conclave will happen after February 28, not before. Assuming no cardinals pass away before then, there are currently 118 cardinals who will be eligible to vote in the conclave. Since he is older than 80, Benedict will not be able to cast a vote in the election, and by the revisions he has made to rules of the conclave, a two-thirds majority will be required to elect the next pontiff.

The Vatican thus anticipates that a new pope will be leading Easter celebrations this year. Regardless of who that man is, the fact remains: Benedict will be the first pope in nearly six hundred years to see his own successor elected.