Don't Let the Boston Bombing Roll Back the Rights of Immigrants

Elliott Young is associate professor of history and chair of the history department at Lewis & Clark College in Portland, Oregon. He is the author of the forthcoming book "Alien Nation: Chinese Migration in the Americas from the Coolie Era through WWII" (University of North Carolina Press). 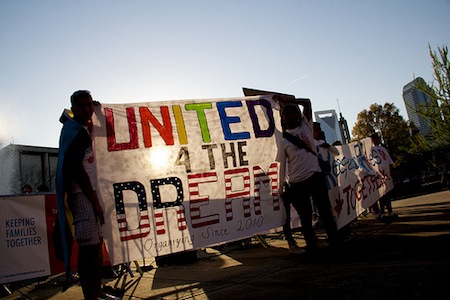 ¡Ya Es Hora! March & Rally for Immigration Reform. Via Flickr.

The big immigration debate is finally happening. The grand bargain, if there is one after the hysteria over the arrest of Boston bombing suspect Dzhokhar Tsarnaev, will likely include a path to citizenship for “illegal” immigrants and tightened border security. What will remain unchanged in whatever deal is struck between Democrats and Republicans is the idea that citizenship as the prerequisite for rights. Citizenship, as political scientist Hannah Arendt wrote in 1951 in The Origins of Totalitarianism, is the “right to have rights.”

It hasn’t always been so. The 1798 Alien and Sedition Acts empowered the government to expel an alien who was engaged in sedition, but barring that aliens pretty much lived with the same safety and protections as citizens until the end of the nineteenth century. In the mid-nineteenth century, Massachusetts began to deport aliens, mostly Irish, who had become paupers because the state didn’t want to provide them with food and housing. Thus began a century and half of immigration restrictions and deportations. Even at the beginning of the twentienth century, forty states and territories allowed foreigners to vote in some or all elections, but anti-immigrant sentiment led to a ban on alien voting in all states by 1931.

In 1882, the federal government passed the first major federal immigration act and simultaneously excluded Chinese laborers. The “likely to become a public charge” clause in the 1882 immigration act not only allowed the government to exclude migrants, but it increasingly became a way for the state to deport poor immigrants already in the country. However, in the late nineteenth century the number of migrant exclusions were relatively small, and deportations were even more infrequent. In 1892, only 2,800 people faced deportation (less than one-tenth of one percent of the foreign-born population). In 2012, in contrast, deportations reached a record 410,000 (one percent of the foreign-born population, over ten times the rate in 1892, though the proportion of foreign-born American residents has decreased several percentage points over the last century).

In his 2013, State of the Union, President Obama ended his speech with a rousing invocation of citizenship as an idea that binds everyone in this country together. “We are citizens,” said the President. “It’s a word that doesn’t just describe our nationality or legal status. It describes the way we’re made. It describes what we believe.” In this formulation, citizenship is not only a nationality or a legal status but is also a belief system.

The problem is that we are not all citizens, nor will we ever all be citizens. Globally there are an estimated 12 million stateless people. In this country, there are an estimated 11 million “illegal” immigrants. Even if Congress manages to find a pathway to citizenship for these 11 million, in another two decades, there will be another 11 million undocumented migrants that have taken their place. It’s one of the few things that Republicans are right about. The 1986 amnesty law granted 3 million immigrants legal status. Less than three decades later, the number of undocumented immigrants has almost quadrupled.

The solution for rightlessness for aliens is not citizenship, but rather universal human rights. The Declaration of Rights of Man and the Citizen, from the French Revolution, contained a contradiction, advocating natural and universal rights at the same time as limiting those rights to citizens, which at that time meant taxpaying adult Frenchmen. The vast majority of the populace, women, servants, slaves and foreigners were excluded from these rights.

Over time liberal democracies have granted rights to these formerly marginalized groups, but a few exceptions remain: children, convicts, felons, and foreigners. While most of us can accept that children should have limited rights until they reach adulthood, the continued exclusion of convicts and foreigners from basic rights contradicts the idea of universal rights. Over 5 million adults in the US are denied the right to vote because of felony disenfranchisement.

U.S. courts have offered protections for legal and “illegal” aliens, including the right to due process, equal protection of the law, the right to not be subject to unreasonable search and seizures, and access to emergency healthcare and public education. However, given the unprecedented explosion of deportations in the last two decades, these protections do not amount to much when a person can be easily jailed and quickly expelled from the country.

Even though illegal aliens have a right to a trial, a study by the National Immigrant Justice Center found that 78 percent of detainees were barred from contacting their lawyers, and many could not afford legal representation. The average wait for a trial according to the Transactional Record Access Clearinghouse is one and a half years, and in some states detainees wait twice that long in jail before coming before a judge. Immigrants are being placed in solitary confinement for weeks on end, and denied basic healthcare and legal representation. It is no wonder that tens of thousands of migrants choose “voluntary removal” each year rather than face indefinite incarceration.

The immigration and gay marriage debate are similar in that each seeks to grant rights to groups that have been formerly excluded. The advocates of gay marriage and a path to citizenship end up reinforcing the link between rights and the institutions of marriage and citizenship. Why not grant rights to people based on their inalienable right to “life, liberty and the pursuit of happiness”? Those who want to get married or become citizens should be able to do that, but their basic human rights should not depend on it.

Dzhokhar Tsarnaev was not read his Miranda rights when he was arrested on Friday because the government invoked a “public safety” exception. Many critics of the government’s actions argued that the suspect should be entitled to such rights because he is a U.S. citizen, but this assertion only reinforces a distinction that is increasingly becoming moot. The suspension of civil liberties and law abroad in the global “war on terror” eventually erodes citizens’ rights at home. Let’s not just defend citizen rights but human rights. The “rights to have rights” should be universal.