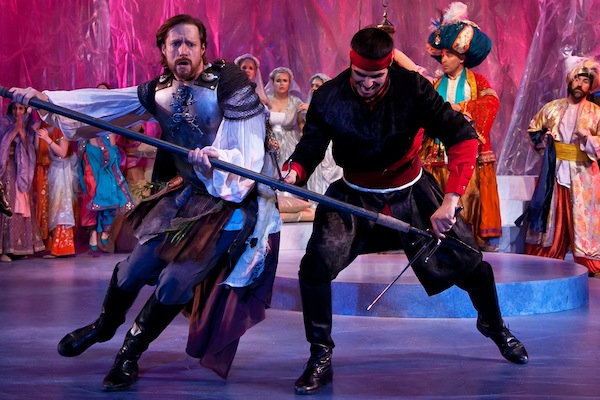 Image via the author.

William Shakespeare’s play Pericles, written late in his career, is one of his problem plays. It is not a history play, a murder play or a political play. It is a wild carnival of people and emotions that takes place along the sea coasts of the Mediterranean in 300 BC with, it seems, something for everybody. It starts with incest and then escalates into kidnapping, lust, shipwrecks, pirates, good dads and bad dads. The drama opened last week at the Shakespeare Theater of New Jersey.

The first act of the play, supposedly written by a collaborator of Shakespeare’s, is very different than the second act, which he seems to have penned. That first act is full of all the wild material in the oddly put together play and at the end of it you sit back and wonder what on earth you are watching. You are as lost as the characters racing from Tarsus to Antioch, Tyre and Pentapolis and the pirates sailing the seven seas. Things settle down in act two, though, and the fine acting of Jon Barker as Pericles, Lindsey Kyler as his daughter Marina, Jordan Laroya as Lysimachus, a local Governor, and others brings the play to life. If you can get through act one, there is satisfaction in act two.

You must give director Brian Crowe a lot of credit for turning a tangled play into a pretty decent story. He did wonders with everything going on in act one (Sinbad did not do as much sailing as these folks). Crowe added much color and some delightful comic touches to the confused drama, including a colorful festival. He even dressed one man to look like the magician Karnac from the old Johnny Carson television show.

Director Crowe gets some fine performances from Barker , Kyler and Laroya, but everybody else in this rather large cast works well together as the ensemble. There are points in the play when it drags and others where it soars. Ms. Kyler, as Marina, is wonderful as the daughter of Pericles, a prominent man who, on several occasions, has to save her own life from court assassins and pirates with a lot of emotion and fast talk and she does it brilliantly. Barker, as Pericles, grows in the role and by the end of the story is the strong and much respected patriarchal Prince of Tyre. He has become a more powerful and understanding ruler through the travails of his journeys.

Set designer Brian Ruggaber did a fine job of creating sprawling cities and shipwrecks on the Shakespeare Theater stage and costume designer Jayoung Yoon did good work in recreating the styles of 300 BC (I think she slipped in the Karnac hat just to have some fun).

The infrequently staged Pericles is a challenge for any theater. The folks at the Shakespeare Theater need to be applauded for tackling it. Pericles is not Hamlet, but has its place in the Bard’s vast pantheon.

One negative in Shakespeare’s text in this work is his lack of history. This play was based on several books about a fictional story set three hundred years prior to the birth of Christ. The eastern Mediterranean, anchored by Greece, was full of historic drama and international politics in that era, as well as brutal wars. It was the time of Alexander the Great of Greece, who conquered much of the known world, the Pyrrhic Wars, the Syrian Wars, the newly established Seleucid Empire in conquered Persia. Philosophy and literature bloomed in that area. Mathematician Euclid wrote his classic work Elements. Much was happenings. None of it appears in the play. The story could have been set in 2013 with Somali pirates, modern cruise ships, fast cars and street festivals. There is a lot of good history in most Shakespearean plays, so the lack of it here is disappointing.