Rocking and Rolling with Ferdinand and Imelda Marcos 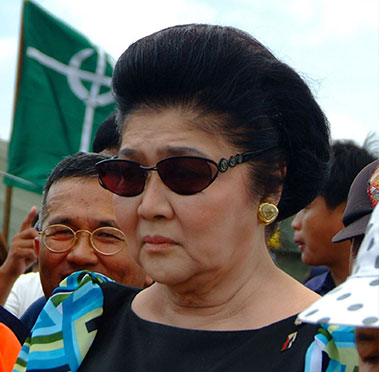 In the scene where he is elected President of the Philippines in 1965, Ferdinand Marcos leaps across three stages at three different elevations – across the entire theater – pops up behind a podium and raises his hands in the air in triumph as the music crescendos and balloons fall from the ceiling. His beautiful young wife Imelda is nearby, smiling. It is the symbolic moment of the play, a thunderclap of glory for one of the most iconic and controversial politicians of the 20th century and his heralded wife (she of the 2,700 pairs of shoes).

Here Lies Love, that opened last week, is the story of the Marcoses from 1954 until the day in 1986 when they fled Manila with tens of thousands outraged citizens surrounding their palace. It is, simply put, one of the best history plays and one of the most imaginative and delightful musicals in theater history.

Here Lies Love is the biography of the Philippine President and his wife and their tumultuous and, critics charge, corrupt reign. It covers his political triumphs and raw lust for power, Imelda’s obsession with money, clothes and houses, a life of red carpets, champagne and parties from Manila to Manhattan. And all of this while the Filipino people starved. Their tale is chronicled to marvelous ear popping and heart pounding music played all around you.

Here Lies Love is a great historical play and a theatrical triumph.

What makes the play so special is not just its plunge into Philippine history, but the physical set up of the theater. Most of the audience stands the entire 90 minutes and, at times, claps their hands and dances. The three, six foot high platforms make up the movable stage in the middle of the theater and another stage surrounds the entire audience. There are two large main stages at each end of the theater, and maintenance crews also move the Marcos and others about on rolling square stages.

Having the audience stand in the middle of the theater and take part in the show is called “immersive” theater and in this play you are really immersed.

The play is all singing, but not quite a rock opera. The music tells the story and, in the Marcos case, it is a dramatic and scandalous tale of a dictatorship run amuck, intrigue, back stabbing and scandal. While you see the story unfold on the various stages, you also see the Marcos story unfold on more than a hundred pieces of film shown on all of the screens and walls that surround the audience. The projection footage tells a mesmerizing tale of Marcos’ rise to power and how he solidified his power, in the end declaring martial law and (it was charged but never proven) have a political opponent murdered.

Ruthie Ann Miles, as Imelda, steals the entire show, especially at the very end, when she belts out the title song as she moves through the audience and dances with the men and women there. She does not look that much like Imelda Marcos, but has the haughtiness down very well. Jose Llana is a perfect Marcos – heroic, handsome and thoroughly detestable. Llana has that cold, steely look that made Marcos so memorable. Other fine performances are by Conrad Ricamora as Benigno Aquino Jr., a Marcos political foe who is killed, Melody Butiu as Estrella, Imelda’s childhood friend and Natalie Cortez as Aquino’s mother.

The Marcos story lasted sixty years, so the play can’t cover all of it. The story, by David Byrne, with music from Byrne, Fatboy Slim, Tom Gandey and J. Pardo, starts when Imelda wins a beauty contest and then meets Marcos, who is running for the Senate, They get married and plunge into national politics. He wins the Presidency in 1965 and then, critics said, their corruption began. The play, like Evita, suggests that sudden fame and wealth turned Imelda greedy and materialistic and turned her heart cold. Everything with her is big, big, big and costly. The press and opposition party are critical of her and she immediately gets defensive, as does her husband. Gradually, over the years, the stability of the Marcos government fractures and unrest grows. Unhappy people take to the streets. Marcos resignation is demanded and Acquino Jr. returns to the country in 1983 to lead a movement to oust Marcos.

The show might have done more with Imelda’s flamboyant public life, although much of it is covered in the videos. She was named an Ambassador by her husband and as such traveled the world, befriending hundreds of political figures and celebrities in her travels. She and Marcos were accused of using her travel as a means to set up bank accounts all over the world and looting the government (again, never proven). Imelda oversaw the construction of several large art and sports center and hosted hundreds of lavish parties and receptions at the Palace. She and Marcos lived in a world of extravagance and excess.

The history in the play is pretty accurate. The end of the story is a little shortened for dramatic reasons. The writer of the play has Aquino killed and the People Power revolution right after that, and then Marcos immediate fleeing. In real life, Aquino was skilled in 1983 and it took three more years of protests before Marcos actually left the country. Marcos died in Hawaii in 1989

When protestors poured into the Palace after the am Marcoses fled, they found in her closets 15 mink coats, 508 gowns, one thousand handbags and 2,700 pairs of shoes.

The ‘iron butterfly,’ as Imelda was called, was allowed to return to the Philippines and became active in politics again. She ran for President in ’92 (finished fifth out of seven candidates) and was later elected to Congress twice. She lives in the Philippines today.

The Marcos story was an unusual and wild one and it is told brilliantly in this wild and unusual play.