Edgar Allan Poe Is Turning Over in His Grave 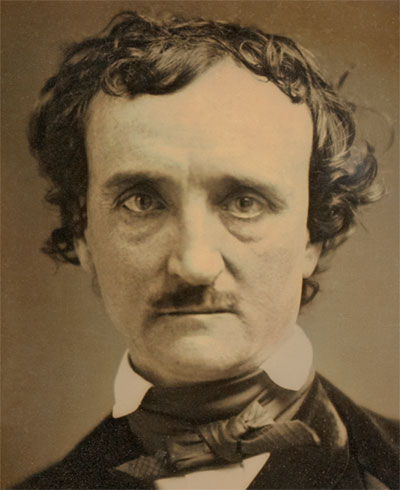 The last days of Edgar Allan Poe, the titanic American writer and poet, were a murky mess. Poe, delirious, was found on a street in Baltimore and taken to a local hospital, where he died three days later. There are several versions of the story, that took place in 1849, including the more popular one that he had been murdered. Now, in Red-Eye to Havre de Grace, that opened last week, playwrights Thaddeus Phillips, Jeremy Wilhelm, Geoff Sobelle, David Wilhelm, Sophia Bortolussi and Ean Sheehy suggest that he suffered a nervous breakdown, took the wrong train and was chased by the ghost of a woman.

The play is, in its finest moments, underwhelming.

That is a tragedy because the poet’s last days were fascinating. Poe was a moody poet/novelist/journalist who had struggled in his professional life (little money) and his personal life. He married his 13 year old cousin and then watched her die in bed for five years in their cottage in New York (she passed in 1847). His last days, that involved a visit to Philadelphia and Baltimore in 1849, were the culmination of a troubled year for the poet, who gave the world classic poems like The Raven and Annabel Lee and stories such as the Murder in the Rue Morgue, The Tell Tale Heart, The Pit and the Pendulum, the Murder of Marie Roget and The Black Cat.

The clubhouse of playwrights passed on that history and came up with a convoluted story that had little drama and less plot. The lighting in the theater was dreadful and members of the audience could hardly read the wordage on the top of the stage and rarely knew what was going on.

The play takes place in 1849, but somehow Ranger Steve, a contemporary 2014 man sporting a snappy wide brimmed hat who works in the Department of the Interior at the Poe house in Philadelphia, travels with Poe from city to city. One man time machine? The ranger’s 2014 take on life is, well, not very interesting.

This is also a play that cries out for history. What was life like in 1849? What were Poe’s publishers like? His fans? What was his relationship with his late wife? His family? How famous was he at the time? You never find out the answers to any of these questions.

The sets by Thaddeus Phillips are a bit odd, with doorways that turn into tables and tables that turn into doorways. A few lights are added and you have a train, or something.

The actors in the play struggle through it, with not much help from director Thaddeus Phillips, who manages the activity on stage like a demolition derby.

Edgar Allan Poe was one of the world’s great voices and none of his brilliance comes out in the play. He married a wife far too young for him, drank more than he should have, feuded with many people, argued with newspaper editors and died a miserable death at age 40, but in the middle of all of that was a shooting literary star whom the world will never forget.

Should you see this play?