How Should We Teach About Human Rights in the Trump Era?

Luke Reader received a Ph.D. in History from University of California, Irvine. He researches internationalism and the British Labour Party, and is currently a lecturer in the SAGES program at Case Western Reserve University. 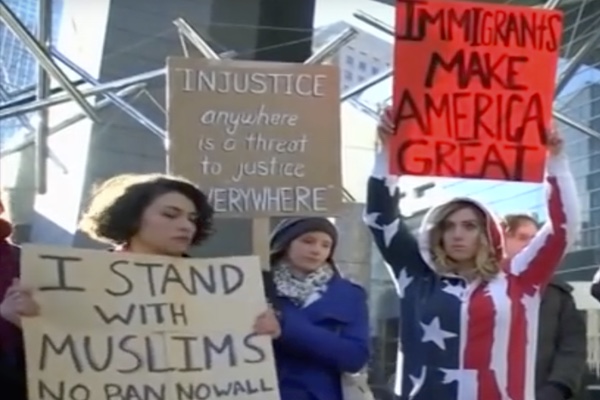 As a historian, I can certainly appreciate the irony. As a representative of US Together, an Ohio-based mutual assistance agency for the resettlement of refugees and immigrants, was speaking to my human rights writing class, Donald Trump was putting the finishing touches to an executive order that would prevent those same refugees and immigrants from traveling to the United States.

Academics, journalists, and denizens of social media were quick to note that the executive order – signed on a Holocaust Remembrance Day in which the White House refused to acknowledge Jewish suffering – bore the echo of the refusal to let Jewish refugees enter the country in the late 1930s. But by preventing refugees from entering their new home, and by forbidding entry to the US to travelers from seven majority Muslim nations, the executive order did not just contrive a moral crisis or make Islamophobia an instrument of government policy. It also attacked the very premises around which we frame our understanding of human rights.

There is both a philosophical and an institutional dimension to the idea of human rights.

In Inventing Human Rights (2007) Lynn Hunt presents human rights as a by-product of Enlightenment era philosophical debates. In the mid 18th century two genres of writing, the novel and accounts of judicial torture, created a new sensibility focused upon the individual. The act of reading generated an “imagined empathy” that led to the realization that all humans had an inner self and possessed an innate capacity for reason. Hunt suggests that these shared interactions with text created sufficient epistemological uncertainty to augur a new social and political order. This vision was given life by the American and French revolutions, which sought to realize a “self-evident” claim to a universal set of rights, and was later reaffirmed by the 1948 United Nations Declaration of Human Rights.

In The Last Utopia (2010) and Human Rights and the Uses of History (2014) Samuel Moyn argues that it took the alignment of a universal and utopian sense of belonging with a set of supportive institutional structures for human rights to become a cohesive idea. Under this reading, the idea of human rights crystallized only in the 1970s following the collapse of earlier utopian movements: nationalism, early 20th century internationalism, colonization and decolonization, and communism and anti-communism. NGOs and far-reaching international movements organized around a language of universal rights and began “envisioning an international law of human rights as the steward of utopian norms, and as the mechanism of their fulfillment.” (The Last Utopia 4) From its initial efforts to support dissidents in the Soviet bloc, the human rights movement swiftly became a common element of late 20th century discourse.

Both Hunt and Moyn see human rights as evolutionary. As they explain, human rights are embedded as an idea within our society. But at the same time, they remain prey to different cultural, political, and social pressures that can force the refusal, withdrawal, or redefining of various sets of rights.

The executive order seems the obverse of these philosophical and institutional readings of human rights. This is evident not only in the failure to evince any empathetic understanding of the suffering of refugees, but also in the callous disregard of the promise of sanctuary offered by this country to refugees irrespective of their origin. While the utopian framework of human rights remains, the institutions of government that are supposed to advance this idea have abandoned their universal application. What is left is an articulation of human rights that is rooted in caprice and religious and national specificity.

So what is the best method for presenting these debates and events in the classroom?

Two approaches seem plausible. The first considers the function of human rights. In my course, we study human rights as both a language that gives meaning to the world and as a reflection of different social and cultural interpretations of the world. Approaching the subject in this way provides an opportunity for critical thought and evaluation, and anchors a study of human rights inside the philosophical and institutional apparatus laid out by Hunt and Moyn.

The second approach could be to consider the ethical complexity of human rights. Teaching students about human rights uses empathy as a means of understanding diverse human experiences and ways of seeing the world. A study of this type asks questions of the ways in which societies define and respond to different human rights concerns, and opens up discussions about the implications of collective and individual decision-making.

Human rights is a subject that is at once historical and contemporary. It is a method of thinking shaped by inquiry. It asks questions. It criticizes. It evaluates. And it teaches us to remain vigilant in ensuring that those institutions that are supposed to reflect our shared values continue to do so.

While the development of human rights was a long process of evolution, Hunt and Moyn also point out that it was non-linear and often prone to missteps. Let’s hope that when we look back on this executive order – and the ideas that produced it – it appears as nothing more than an evolutionary dead-end.