George Marshall Is More Relevant than Ever

William Lambers is an author who partnered with the UN World Food Programme on the book Ending World Hunger. His writings have been published by the Cincinnati Enquirer, New York Times, Cleveland Plain Dealer, Huffington Post and many other news outlets. 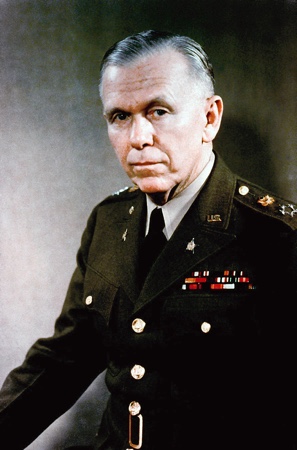 June 5th is the 70th anniversary of the greatest commencement speech ever. On that day, Secretary of State George Marshall did so much more than give words of wisdom to graduating Harvard University students.

Marshall delivered words for peace that would feed and rebuild Europe from the ashes of World War II. His words can mean as much today as they did back in 1947, if we listen. For we need such wisdom to guide us in defeating today’s greatest threat: terrorism.

No one at Harvard knew that history was being made that day in 1947. For Marshall’s speech was the basic outline for a European recovery program. It led to the Marshall Plan, approved by Congress the following year, which sent billions in aid to Europe for their reconstruction.

The Marshall Plan was America's humanitarianism at its finest. It gave nations what they need to be free, have a strong economy, and be at peace.

As Marshall said in his speech "Our policy is directed not against any country or doctrine but against hunger, poverty, desperation and chaos. Its purpose should be the revival of a working economy in the world so as to permit the emergence of political and social conditions in which free institutions can exist."

Many nations were strengthened by the Marshall Plan so they could resist outside forces like Communism, which was spreading in the post-war world.

But one thing we must remember about the Marshall Plan is that it could never have succeeded without food. That is why hunger is highlighted in Marshall’s speech as one of the enemies our policy must be directed against.

This is especially relevant today with hunger being a threat to the stability of many nations.

Marshall, in addition to being Secretary of State, was also a member of President Truman's Cabinet Committee on World Food Programs. Feeding the hungry was a top priority of the administration.

It’s a good thing, too. For what happened in Europe after the Harvard speech threatened to derail the Marshall Plan even before it got off the ground. Severe drought struck that summer. Crops could not grow in Europe and other areas leading to more food shortages as winter approached.

An emergency interim aid food package was approved for Austria, Italy and France. As Marshall told Congress we had to "provide the supplies necessary to permit the people of these three countries to continue to eat, to work, and to survive the winter."

The American public did its part too by collecting food donations via the Friendship Train, CARE packages, the Silent Guest program, Catholic Relief Services food collections, and so many other charitable events.

The end hunger first mentality is something we could desperately use today if we want to defeat terrorism.

The countries where terrorism thrives also suffer immensely from hunger and malnutrition. Afghanistan, Syria, Iraq, Mali, Somalia andYemen are just some of the nations where terrorism has grown amid hunger and chaos. The nations affected by Boko Haram’s evil reign of terror in Africa are also fighting off famine.

According to the US Famine Warning System there are 45 nations needing emergency food assistance. South Sudan, Yemen, Somalia and Nigeria are at the greatest risk of famine.

What hope can the people of these countries have if they are starving? How can they possibly have the strength to resist and drive out evil influences like terrorism?

That is why we must help nations overcome hunger if we want them to build peace and be free from terrorist infiltration.

Rick Leach of the WFP USA adds, “We invest in food security because violence feeds on hunger.”

We should provide these countries with food assistance to get through emergency times. We should build up their agriculture and local food production. Like the Marshall Plan we should provide long-term solutions, getting economies and self-sufficiency for these nations.

This would take a dramatic shift in current U.S. policy, which has been emphasizing less foreign aid. There have even been proposals to eliminate food assistance. This would be a tragic mistake.

We must instead realize that not every struggle is going to be won through military action, something Marshall understood well.

Humanitarianism is our greatest tool for peace. The Marshall Plan is a reminder of timeless principles that can always guide us "against hunger, poverty, desperation and chaos.”