2 Myths Involving Canada that Every American Should Know

by John U. Bacon

John U. Bacon is the author of THE GREAT HALIFAX EXPLOSION: A World War I Story of Treachery, Tragedy, and Extraordinary Heroism

Too often we’re told history is a vast glacier that changes everything, and there’s nothing any individual can do about it. It’s inevitable. Individuals don’t matter. Moments don’t matter.

I reject this. History is filled with too many examples of individuals seizing their moment to make a dramtic difference, changing the future for those who follow. 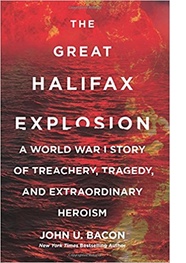 I encountered this phenomenon in spades in my latest book, The Great Halifax Explosion: A World War I Story of Treachery, Tragedy, and Extraordinary Heroism. Several long-standing myths came tumbling down, including two central ones: the United States and Canada have always been allies, and the atomic bomb had no predecesor.

Not surprisingly, some 60,000 United Empire Loyalists became refugees, with half of them heading north to what is now New Brunswick and Nova Scotia, often leaving their property behind for the Americans to take without compensation. They didn’t forget.

During the War of 1812, one of Nova Scotia’s favorite sons, Joseph Barss Jr., returned the favor by capturing, sinking, or burning more than 60 American ships, making him the most wanted man in New England.

During the American Civil War, when Union forces finally got the upper hand against the Confederates after Gettysburg, Northern newspapers urged the Union to keep going until they’d driven the British out of Canada. This was not an idle notion. Two years earlier, Secretary of State William Seward proposed to President Lincoln that they attack British North America, and offered to start the war himself.

As late as 1911, the U.S. Speaker of the House took the floor of Congress to advocate annexing Canada, and received a loud ovation and favorable press coverage. You could not call these two nations allies.

When the United States finally joined the Great War on April 6, 1917, the two countries became official allies for the very first time in their history— if in name only. But it took Canada’s greatest disaster, and the Americans’ surprising response, to change their relationship.

On the morning of Thursday, December 6, 1917, the captain and crew of a French munitions ship called Mont-Blanc were eager to reach the safety of Halifax Harbour – and with good reason. Five days earlier a crew of stevedores in Brooklyn had finished loading her with a staggering 6 million pounds of high-explosives, 13-times the weight of the Statue of Liberty. The touchy cargo was headed for France, where it would be packed in shells and fired on Germans to break the Great War’s three-year stalemate – if they could avoid the hundreds of German U-Boats which had already sunk some 3,000 Allied ships.

A Norwegian relief ship named Imo was just as eager to go in the opposite direction to New York to get supplies. At Halifax Harbour’s narrowest stretch, the two ships played a dangerous game of chicken. At 8:46 a.m., Imo struck Mont-Blanc’s bow, igniting barrels of airplane fuel on deck. Mont-Blanc’s crew escaped on lifeboats, while Halifax’s workers and schoolchildren watched the ghost ship slip perfectly into Pier 6.

At 9:04:35, Mont-Blanc erupted, leveling almost half of Halifax, rendering 25,000 people homeless, wounding 9,000, and killing 2,000 more—all in one-fifteenth of a second, less time than it takes to blink. J. Robert Oppenheimer set up a conference at California-Berkeley in 1942 to study Halifax, the only model available to predict what would happen in Hiroshima. He correctly calculated the first atomic bomb would be only three- to five-times more powerful than the explosion in Halifax.

An hour after Mont-Blanc exploded, leaders in Montreal, Toronto, Boston, and New York received a brief telegram about the tragedy. Massachusetts Governor Samuel W. McCall immediately sent a telegram to the mayor of Halifax: “Understand your city in danger from explosion and conflagration. Reports only fragmentary. Massachusetts ready to go the limit in rendering every assistance you may be in need of. Wire me immediately.”

While waiting for a response, McCall gathered city leaders at Faneuil Hall, where they formed the Massachusetts-Halifax Relief Committee and organized a relief train to leave that evening.

When Governor McCall’s second telegram to Halifax received no response, he sent a third: “Realizing time is of the utmost importance we have not waited for your answer but have dispatched the train.”

Explosion survivor and noted Halifax historian Thomas Raddall recalled, “Doctors and nurses arrived from outlying provincial towns and substantial help was on the way from Montreal and Toronto, but the first and most valuable assistance came from the ancient foe beyond the Bay of Fundy.”

The Boston train had to smash through gigantic snowdrifts left by the Maritimes’ biggest blizzard in a decade. When McCall’s representative arrived Saturday morning, he handed a Canadian official the governor’s letter, which assured him, “I need hardly say to you that we have the strongest affection for the people of your city, and that we are anxious to do everything possible for their assistance at this time.”

The stoic official could not hide the tears streaming down his face. “Just like the people of good old Massachusetts,” he said.

McCall’s group sent another train and two ships loaded with food, clothing, bedding, motor trucks, medical supplies, welfare workers, nurses, and doctors – and “this was only the beginning,” Raddall wrote. The Americans continued operating clinics, housing, and welfare work months and even years after the disaster.

Some seven decades later an interviewer noticed the first thing aging survivors mentioned was the Americans’ “instant and unstinting aid.”

Joseph Ernest Barss, the great-grandson of Canada’s deadliest privateer, had been wounded in the Great War and returned to Nova Scotia to recover. When Mont-Blanc exploded, he put his First Aid experience to use for three sleepless days before being relieved by American medics.

“I tell you we’ll never be able to say enough about the wonderful help the States have sent,” he wrote his uncle. “The response was so spontaneous and everything done even before it was asked for. It brought tears to all our eyes. You know we have always been a trifle contemptuous of the U.S. on account of their prolonged delay in entering the war. But never again! They can have anything I’ve got. And I don’t think I feel any differently from anyone down here either.”

Soon President Wilson and Canada’s leaders were exchanging heart-felt letters on the front page of the New York Times. A few years later, Canada opened official diplomatic relations with the United States, and has been our nation’s biggest trading partner for decades.

Barss was inspired to enroll at the University of Michigan’s medical school, start the school’s varsity hockey program, marry a woman from Battle Creek, and become an American citizen.

His great-grandfather, America’s Most Wanted privateer, would have been amazed.