The Boston Statue that Reinforces the Need for Black History Month

Kevin M. Levin is a historian and educator, who specializes in the Civil War. He lives in Boston. You can find him online at [http://cwmemory.com]. 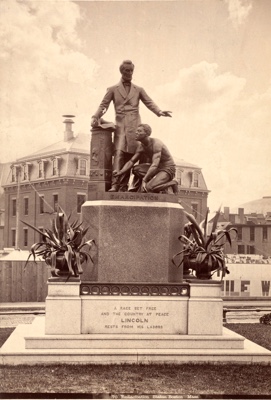 The Emancipation Statue that leaves a false impression

In October 2017 the Massachusetts Department of Conservation and Recreation removed a controversial Confederate marker from Georges Island in Boston Harbor. The United Daughters of the Confederacy dedicated the marker in 1963 to commemorate thirteen Confederate soliders who died while imprisoned at Fort Warren during the Civil War. Few people had ever seen it and even fewer were aware that such a marker even existed in the city. While many people applauded the marker's removal in the wake of the violent White Nationalist rally in Charlottesville, Virginia that left one woman dead, it overshadows a more prominent and problematic statue located in the center of the city.

Located just a block from The Boston Common and Public Gardens on Park Square is sculptor Thomas Ball's Emancipation Memorial or Emancipation Statue. The statue is a copy of the original, which was dedicated in Washington, D.C. in 1876. When it was first unveiled in 1879 the statue had a clear line of sight up through the Common to the State House on Beacon Hill. Today changing street patterns and modern buildings obscures the statue and makes it difficult for some to locate.

Although money for the original statue was raised within the African-American community, Ball's depiction of emancipation reflected deeply engrained assumptions about race among white Americans. The statue features Abraham Lincoln with one hand holding the Emancipation Proclamation and the other beckoning a kneeling slave, who has just been unshackled, to rise and embrace his freedom. The kneeling slave was a popular motif in abolitionist literature before the Civil War and Lincoln in the role of "Great Emancipator" dominated history textbooks and our popular memory of the war throughout much of the twentieth century.

The statue celebrates Lincoln at the expense of enslaved men and women. Frederick Douglass, who helped to dedicate the D.C. statue, is reported to have said that it "showed the Negro on his knees when a more manly attitude would have been indicative of freedom." Even more so, the statue reflects a distorted understanding of the history of slavery and the Civil War that has long held sway. The kneeling slave suggests that African Americans were passive bystanders in this great drama just waiting for freedom to be delivered. Implied is the belief that free and enslaved blacks played no active role in contributing to the destruction of the Confederacy, the preservation of the Union, and the end of slavery.

This distorted and even dangerous historical narrative of African Americans, at a time when their own claims to the rights of full citizenship were being undermined throughout much of the country, eventually led to the establishment of "Negro History Week" (later Black History Month) by Carter G. Woodson and the Association for the Study of Negro Life and History in 1926.

The presence of this statue in a city that was once the center of the abolitionist movement speaks to the continued necessity of Black History Month and history education generally. In a blistering report recently released by the Southern Poverty Law Center on how the history of slavery is taught it was found, among other things, that high school seniors are graduating with little knowledge of the history of slavery, how it was abolished, and its impact on modern day America.

The Public Gardens includes numerous monuments celebrating the city's white abolitionist leaders, including William Ellery Channing, Wendell Phillips and Charles Sumner. Their location just a few short steps to Ball's Emancipation Statue conceals a history that deserves to be better known in Boston. Before the Civil War the north slope of Beacon Hill was a vibrant African-American community. Black abolitionists such as Lewis Hayden, William Wells Brown, David Walker, and Eliza Ann Gardner called for the end of slavery and racial discrimination in Boston and throughout the country.

Today their stories are told in the African Meeting House run by the Museum of African American History for those visitors willing to stray from the more popular Freedom Trail. Contrary to the image of the kneeling slave, these men and women did not wait passively for the "Day of Jubilee." They led the charge. Our monuments and memorials should reflect this truth.