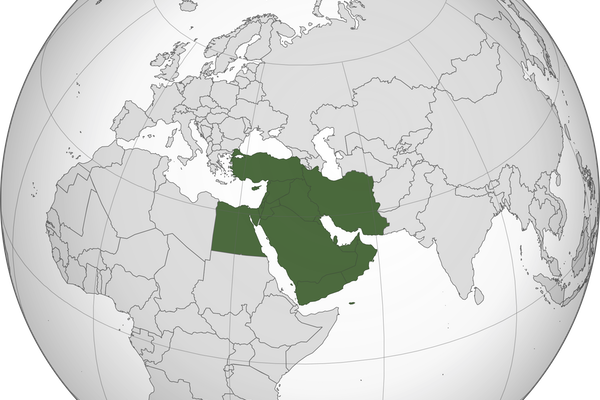 The entire Middle East region that bridges three continents has historically been defined by change: changing people, politics, religious ideas and ideologies. People with power have come and gone, but the land remains and still presents the international community with one of its most challenging conflicts.

For centuries Jerusalem has been an interfaith, intercultural, and international city where different faith communities have converged, comingled, and coexisted in relative peace. This diversity and inclusivity are characterized by such landmarks as the site of King Solomon’s First Temple, the Church of the Holy Sepulcher, and the golden Dome of the Rock in the centuries-old mosaic of Jewish, Christian, Armenian, and Muslim quarters that constitute the city of Jerusalem to this day.

Jerusalem may have had a Jewish identity during the Biblical period of the Kingdom of Israel 930-720 BCE, but the greater region of the Middle East has been occupied and settled by many people bothbefore and after: The Egyptian Merneptah Stele, 1200 BCE; the Neo-Assyrian Empire 722 BCE; the Neo-Babylonian Empire 586 BCE; the Achaemenid Empire 538 BCE; the Macedonian Greeks 332 BCE; the Hasmonean Kingdom 165 BCE, and the Romans in 64 BCE. They all occupied the region for a time.  The area subsequently became increasingly Christian after the 3rd century and increasingly Muslim after it became part of the Muslim state in 638 CE. The Crusader states in the Levant controlled Jerusalem between 1099-1291, the Ayyubid Sultanate ruled from1171-1260, the Ottomans between 1517 and 1917, and the British from 1917 until 1948 when the Jewish State of Israel was proclaimed.

In most of the previous cases, Jerusalem was annexed to existing imperial states. In 1948, however, at least a part of Jerusalem became part of the independent state of Israel. This was partially legitimized on the basis of a scriptural claim that god had promised to the progeny of Abraham. What is often overlooked here is the revisionist interpretations of these scriptures.

The varied scriptural reinterpretations of the myth of the Promised Land aligns with and contributes to the historical claims and controversies from the Hebrew Bible of 500 BCE to the more than 20 braided and polished versions that bridge the Septuagint Bible of 250 BCE with the 1611 King James Bible.

According to the Hebrew tradition, G-d promises the land of Canaan to the descendants of Abram as He brings them out from Ur of the Chaldeans (Genesis 15:7) and after the Exodus from Egypt (Deuteronomy 1:8). G-d promises this land to all eight of Abraham’s sons by his three wives: Hagar, Sarah, and Keturah.

Then, somehow, the scriptural narrative changes as though revealed by a different god.  God becomes a historical revisionist and revokes the covenant with Abraham, as if he didn’t have the foreknowledge of what was to come. This god excludes the other seven sons of Abraham and promises the land only to the descendants of Jacob (Jeremiah 3: 3-34); and the land is conveniently re-named Israel. God also forgets that in addition to Abraham he had specifically made a covenant with Hagar, the mother of Ishmael, when the angel of God called on Hagar: “Lift the boy up and take him by the hand, for I will make him into a great nation” (Genesis 21:18, 17:23, and 17:26) are all forgotten and they are now doomed with slavery (Galatians 4:25).

This god not only orders the ethnic cleansing of the land from its existing inhabitants, “the Kenites, Kenizzites, Kadmonites, Hittites, Perizzites, Rephaite, Amorites, Canaanites, Girgashites and Jebusites" (Genesis 15:18-20), he also participates in it, “and I will drive out the Canaanite, the Amorite, and the Hittite and the Perizzite, the Hivite and the Jebusite” (Exodus 33:2). Furthermore, the performance of religious rites becomes a requirement to live on the land: “He that sacrificeth unto any god, save unto the Lord only, he shall be utterly destroyed” Exodus 22:20).

There are obvious scriptural and moral inconsistencies here. The seemingly arbitrarily targeted tribes for expulsion from the land in Genesis and those in Exodus do not match. Neither do the boundaries of the Promised Land described in Genesis 5, Numbers 34:1-12, with those in Ezekiel 47: 13-20. But more importantly, this is a conflicted god who destroys his own creation through ethnic cleansing, institutionalizes religious tribalism, and has a weird sense of ‘divine justice’ as he takes land from one group of people and gives it to another, without compensation, transaction, or exchange at a time when 95 percent of the earth’s surface was uninhabited.

This idea of a land identified with people rather than with an empire came in handy centuries later when the "Westphalian" doctrine of states led to the formation of 19th-century European nation states. When secular European states were defined in ethnic terms, the religious identity of the European Jews became an anomaly and the ‘descendants’ of Jacob, victims of centuries of racial discriminations found themselves stateless. If before a Jewish person didn’t have a place in a European neighborhood, now the Jewish nation had no place on the European continent.

European Jews had two choices. They either had to follow the 18th century “Jewish Enlightenment” movement, the Haskala, that urged Jews to assimilate in Western secular culture or they had to follow the Zionist movement that called for the establishment of a Jewish state in Palestine. Zionism was defined by its inherent paradoxes. On the one hand, due to the integrated racial religious identity of the Jews, Zionism was a racial and religious movement that was diametrically opposed to European nationalism that was racial, but secular. The second paradox, that would become more visible and pronounced in due course, was Zionism’s call for the establishment of a racially and religiously exclusive state in  a racially inclusive and religiously-diverse Middle East.

In spite of these contradictions the call for the for the establishment of a Jewish state in Palestine came in handy for the British. During WWI Lord Balfour, the British Foreign Secretary, used both the British design on the disintegration of the Ottoman Empire from within and scriptural revisionism to “favour the establishment in Palestine of a national home for the Jewish people,” with the clear understanding “that nothing shall be done which may prejudice the civil and religious rights of existing non-Jewish communities in Palestine.”

The establishment of a Jewish state outside of Europe may have resolved the European racial conflict, but in reality, it has simply been transferred to the Middle East where every European Jewish settler turns a Palestinian into a refugee.  A hundred years later, the racial divide and religious hatred persists, in a role reversal where today’s Palestinians live the lives of yesterday’s Jews.

To make an already bad situation worse, the Trump administration recognizes Jerusalem as ‘the eternal capital’ of Israel. To claim Jerusalem only as a Jewish city in biblical/scriptural terms is based on two false premises: 1) that a certain people would remain faithful to the same belief system throughout history, and, 2) if a fraction of that community happens to change or revise their belief system, as people often do, they would disqualify to inherit the land.

Can a land be claimed on the basis of the scriptural myths of one religion with implied exclusion of all other religious communities? Can ethnic cleansing be ‘divinely’ sanctioned as stated in Genesis 15:18-20 and Exodus 33:2?  Such a revelation is incomprehensibly incompatible with democracy and human rights in the age of reason.

Resolving these inconsistencies, biblical, historical, political and otherwise, demand nothing short of a paradigmatic shift in our attitude and approach to a problem that is at the heart of the Middle East crisis. In view of the current state of regional and global politics, such a shift may seem unattainable and certainly not to everyone’s liking, but in its absence, the future looks bleak for all parties concerned.

The current asymmetrical warfare is fought on the battleground of the womb and the tomb that is threatened by both the incentivized accelerated Jewish migration and the reactive Palestinian population explosion in a geography where water and land cannot sustain an environmentally sustainable growth much longer. Will there arise responsible leadership in any of the Abrahamic faith communities with a vision to see people’s humanity before their racial or religious identities? Only time will tell.