Alex Kershaw is an author of books on World War II, including The New York Times best-sellers The Bedford Boys and The Longest Winter. 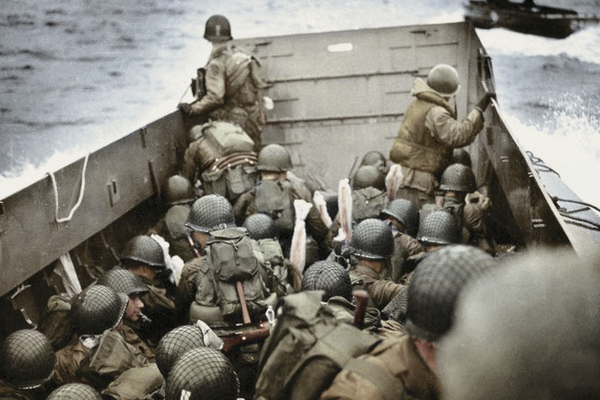 From THE FIRST WAVE: The D-Day Warriors Who Led The Way to Victory in World War ll by Alex Kershaw, published by Dutton, an imprint of Penguin Publishing Group, a division of Penguin Random House, LLC. Copyright © 2019 by Alex Kershaw.

The clock in the war room at Southwick House showed 4 a.m. The nine men gathered in the twenty‐five‐by‐fifty‐foot former library, its walls lined with empty bookshelves, were anxiously sipping cups of coffee, their minds dwelling on the Allies’ most important decision of World War II. Outside in the darkness, a gale was blowing, angry rain lashing against the windows. “The weather was terrible,” recalled fifty‐three‐year‐old Supreme Allied Commander Dwight Eisenhower. “Southwick House was shaking. Oh, it was really storming.” Given the atrocious conditions, would Eisenhower give the final go‐ahead or postpone? He had left it until now, the very last possible moment, to decide whether or not to launch the greatest invasion in history.

Seated before Eisenhower in upholstered chairs at a long table covered in a green cloth were the commanders of Overlord: the no‐nonsense Missourian, General Omar Bradley, commander of US ground forces; the British General Bernard Law Montgomery, commander of the 21st Army Group, casually attired in his trademark roll‐top sweater and corduroy slacks; Admiral Sir Bertram Ramsay, the naval commander who had orchestrated the “miracle of Dunkirk”—the evacuation of more than 300,000 troops from France in May 1940; the pipe‐smoking Air Chief Arthur Tedder, also British; Air Chief Marshal Sir Trafford Leigh‐Mallory, whose blunt pessimism had caused Eisenhower considerable anguish; and Major General Walter Bedell Smith, Eisenhower’s chief of staff.

A dour and tall Scotsman, forty‐three‐year‐old Group Captain James Stagg, Eisenhower’s chief meteorologist, entered the library and stood on the polished wood floor before Overlord’s commanders. He had briefed Eisenhower and his generals every twelve hours, predicting the storm that was now rattling the windows of the library, which had already led Eisenhower to postpone the invasion from June 5 to June 6. Then, to Eisenhower’s great relief, he had forecast that there would, as he had put it with a slight smile, “be rather fair conditions” beginning that afternoon and lasting for thirty‐six hours.

Once more, Stagg gave an update. The storm would indeed start to abate later that day.

Eisenhower got to his feet and began to pace back and forth, hands clasped behind him, chin resting on his chest, tension etched on his face. 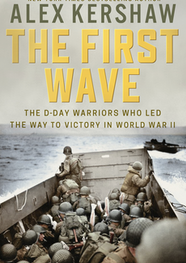 What if Stagg was wrong? The consequences were beyond bearable. But to postpone again would mean that secrecy would be lost. Furthermore, the logistics of men and supplies, as well as the tides, dictated that another attempt could not be made for weeks, giving the Germans more time to prepare their already formidable coastal defenses.

Since January, when he had arrived in England to command Overlord, Eisenhower had been under crushing, ever greater strain. Now it had all boiled down to this decision. Eisenhower alone—not Roosevelt, not Churchill—had the authority to give the final command to go, to “enter the continent of Europe,” as his orders from on high had stated, and “undertake operations aimed at the heart of Germany and the destruction of her armed forces.” He alone could pull the trigger.

Marshaling the greatest invasion in the history of war had been, at times, as terrifying as the very real prospect of failure. The last time there had been a successful cross‐Channel attack was 1066, almost a millennium ago. The scale of this operation had been almost too much to grasp. More than 700,000 separate items had formed the inventory of what was required to launch the assault. Dismissed by some British officers as merely a “coordinator, a good mixer,” the blue‐eyed Eisenhower, celebrated for his broad grin and easy charm, had nevertheless imposed his will, working eighteen‐ hour days, reviewing and tweaking plans to launch some seven thousand vessels, twelve thousand planes, and 160,000 troops to hostile shores.

Eisenhower had overseen vital changes to the Overlord plan. A third more troops had been added to the invasion forces, of whom fewer than 15 percent had actually experienced combat. Heeding General Montgomery’s concerns, Eisenhower had ensured that the front was broadened to almost sixty miles of coast, with a beach code‐named Utah added at the base of the Cotentin Peninsula, farthest to the west. It had been agreed, after Eisenhower had carefully managed the “bunch of prima donnas,” most of them British, who made up his high command—the men gathered now before him—that the attack by night should benefit from the rays of a late‐rising moon.

In addition, it was decided that the first wave of seaborne troops would land at low tide to avoid being ripped apart by beach obstacles. An elaborate campaign of counterintelligence and outright deception, Operation Fortitude, had hopefully kept the Germans guessing as to where and when the Allies would land, providing the critical element of surprise. Hopefully, Erwin Rommel, the field marshal in charge of German forces in Normandy, had not succeeded in fortifying the coast to the extent that he had demanded. Hopefully, the Allies’ greatest advantage—their overwhelming superiority in air power— would make all the difference. Hopefully.

Not even Eisenhower was confident of success. “We are not merely risking a tactical defeat,” he had recently confided to an old friend back in Washington. “We are putting the whole works on one number.” Among Eisenhower’s most senior generals, even now, at the eleventh hour, there was precious little optimism.

Still pacing, Eisenhower thrust his chin in the direction of Montgomery. He was all for going. So was Tedder. Leigh‐Mallory, ever cautious, thought the heavy cloud cover might prove disastrous.

Stagg left the library and its cloud of pipe and cigarette smoke. There was an intense silence; each man knew how immense this moment was in history. The stakes could not be higher. There was no plan B. Nazism and its attendant evils— barbarism, unprecedented genocide, the enslavement of tens of millions of Europeans—might yet prevail. The one man in the room whom Eisenhower genuinely liked, Omar Bradley, believed that Overlord was Hitler’s “greatest danger and his greatest opportunity. If the Overlord forces could be repulsed and trounced decisively on the beaches, Hitler knew it would be a very long time indeed before the Allies tried again—if ever.”

Six weeks before, V Corps commander General Leonard Gerow had written to Eisenhower outlining grave doubts, even though it was too late to do much to alter the overall Overlord plan. It was distressingly clear, after the 4th Division had lost an incredible 749 men—killed in a single practice exercise on April 28 on Slapton Sands—that the Royal Navy and American troops were not working well together. Apart from the appallingly chaotic practice landings—the woeful yet final dress rehearsals—the defensive obstacles sown all along the beaches in Normandy were especially concerning.

Eisenhower had chided Gerow for his skepticism. Gerow had shot back that he was not being “pessimistic” but simply “realistic.” And what of the ten missing officers from the disaster at Slapton Sands who had detailed knowledge of the D‐Day operations, the most important secret in modern history? They knew about “Hobart’s Funnies,” the assortment of tanks specially designed to cut through Rommel’s defenses—including flail tanks that cleared mines with chains, and DUKWs, the six‐wheeled amphibious trucks that would take Rangers to within yards of the steep Norman cliffs—and they knew exactly where and when the Allies were landing. Was it really credible to assume that the Germans had not been tipped off, that so many thousands of planes and ships had gone unseen?

Even Winston Churchill, usually so ebullient and optimistic, was filled with misgivings, having cautioned Eisenhower to “take care that the waves do not become red with the blood of American and British youth.” The prime minister had recently told a senior Pentagon official, John J. McCloy, that it would have been best to have had “Turkey on our side, the Danube under threat as well as Norway cleaned up before we undertook [Overlord].” The British Field Marshal Sir Alan Brooke, chief of the Imperial General Staff, had fought in Normandy in 1940 before the British Expeditionary Force’s narrow escape at Dunkirk. Just a few hours earlier, he had written in his diary that he was “very uneasy about the whole operation. At the best it will fall so very, very far short of the expectation of the bulk of the people, namely all those who know nothing about its difficulties. At the worst it may well be the most ghastly disaster of the whole war!”

No wonder Eisenhower had complained of a constant ringing in his right ear. He was almost frantic with nervous exhaustion, but he dared not show it as he continued now to pace back and forth, lost in thought, listening to the crackle and hiss of logs burning in the fireplace. He could not betray his true feelings, his dread and anxiety.

The minute hand on the clock moved slowly, for as long as five minutes according to one account. Walter Bedell Smith recalled, “I never realized before the loneliness and isolation of a commander at a time when such a momentous decision has to be taken, with the full knowledge that failure or success rests on his judgment alone.”

Eisenhower finally stopped pacing and then looked calmly at his lieutenants.