DJ Alan Freed: The Inventor of Rock and Roll 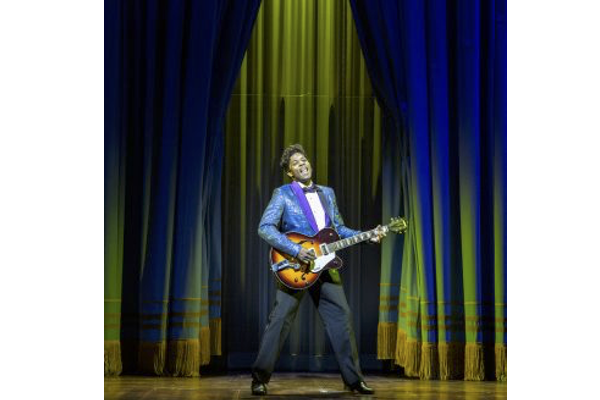 The “juke box musical” is a term that describes plays about an individual or group in rock music history in which there are a lot of songs but a thin plot and undeveloped characters. Most of them fail. Some, like The Jersey Boys, Beautiful, and Ain’t Too Proud, succeed.

Rock and Roll Man: the Alan Freed Story, the tale of the fabled 1950s DJ who coined the term "rock and roll” and was the most famous DJ in America until the arrival of Dick Clark, falls somewhere in the middle. The play, with book by Gary Kupper, Larry Marshak and Rose Caiola, and music and lyrics by Kupper, just opened at the Colonial Theatre, part of the Berkshire Theater Festival, in Pittsfield, Massachusetts. It is a rocking and bopping night of wop-bop-a-doo-wop rock music entertainment, loaded with fabulous songs from the early days of rock, such as those by Chuck Berry, Little Richard, the Coasters and the Platters, and full of brilliant choreography.

The play has eye-opening staging. There is a turntable on stage that spins about in the first act, a high courthouse bench for the play’s judge, a second level balcony on which performers delight the audience, recreated music studios, night clubs and bars. It is a music city of a stage. It is, for rock fans a rip-roaring good night at the theater.

The play has a flashback format. In its beginning, Alan Freed emerges as a troubled drunk as the payola scandal (bribes to DJs to play particular songs) hits America. Then we go back to a mythical court drama in which Freed is on trial (the court of public opinion). His defense attorney is the colorful, flamboyant singer Little Richard, played with all of his pomposity and wildness by Richard Crandle, whose costume looks like an exploding candle. The prosecutor is FBI Director J. Edgar Hoover. The court then recounts Freed’s life from his early days as a DJ at a small radio station in Cleveland to his position as the number one DJ in America at New York City’s WINS radio in the early 1960s.

Director Randal Myler does a pretty good job of holding on to the reigns of a play that is a bit cumbersome. He gets fine performances from Crandle as Little Richard and a very talented ensemble of actors, singers and dancers, plus numerous famous quartets.

The play has some problems that hurt it, though. The opening act is overloaded with songs and underdeveloped with plot. It appears to be more of a music review – the best moments of the 1950s, everybody please clap. You are overwhelmed with song after song. Dizziness sets in. The tunes are good, but they knock you over in your seat. The story of Freed, who was such a music figure in that era, emerges very slowly and Alan Campbell, the actor who plays Freed, never quite gets going in his role. Campbell himself rambles throughout the play. Campbell presents Freed as more of a bystander in a story and not the tenacious Freed himself. He needs a sharper focus and more pizzazz. George Wendt, the co-star of the famed television series Cheers, has the same problem. He plays J. Edgar Hoover. Wendt never captures the character of Hoover. Wendt is a bit miscast in the role. The play is also too long. It runs about two and a half hours and a good twenty minutes could be cut, especially in the first act. Many songs overlap each other and make the same plot point and could be dropped.

The story needs to be sharper. There are points in it, such as the African American singer Frankie Lymon kissing a white girl ln TV, that were very controversial and they are glossed over in the story. Freed’s deadly alcoholism is mentioned several times in the play but you never expect drink to ensnare him. That needs to be strengthened. The payola scandal, that stunned the country and brought down several well-known DJs and grabbed headlines for weeks, needs to explained better.

Overall, though, Rock and Roll Man is a good show. It is a treasure house of entertainment history and the payola scandal. You learn just about all there is to know about how Freed emerged, caught the public eye and became the number one DJ in America. You learn how DJs on radio worked, how they moved to television (Dick Clark) and how rock and roll, so feared by the police, parents and the schools, literally took over America. You learn much about the attitude of teenagers in that day (accused of being juvenile delinquents by just about everybody. There is a lot on how records became number one best sellers, the integration of music and America and the development of the rock and roll concert, a rarity in American entertainment history.

And, of course, the show gives you dozens of classic songs, real finger-snappers, from the early days of rock and roll, - Good Golly Miss Molly, Great Balls of Fire, I’m Walkin’, Lucille, Maybelline and Roll Over Beethoven, to name a few.

So, try to ignore the weak spots in the show, put on your blue suede shoes and jitterbug out on to the dance floor.

Rock and roll is here to stay…