The Presidential Tradition of Knowing When to Quit

Wallace Hettle is a Professor of History at the University of Northern Iowa and author of The Confederate  Homefront:  A History in Documents. 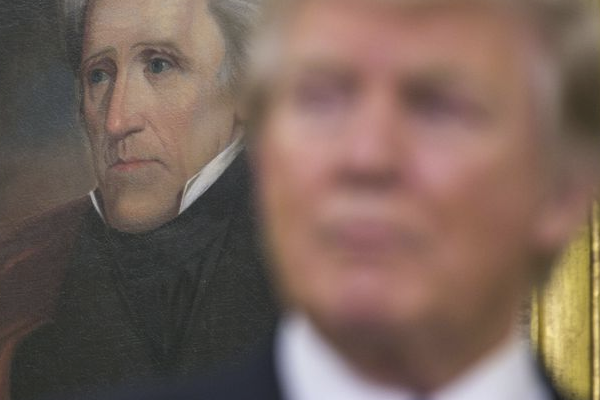 Twenty-five years ago, a friend of my in-laws took us to Christmas Eve dinner at the iconic Tavern on the Green in New York’s Central Park.  As we looked at the menu, we noted a young woman walking back and forth for a long time with a fussy baby.  And someone at our table said, "I think that's Marla Maples."

So we looked over at her table, and there he was: Maples’s famous husband Donald Trump (no, he didn't help with the baby).  It hindsight, it's strange that he was famous even then, long before his reality show ever aired.

At that time, Trump was mostly known for putting his name on buildings, going bankrupt trying to make Atlantic City the next Las Vegas, and having messy divorces.  He mattered only because he did these things so publicly.  Most billionaires avoid gossip columnists like the plague, but Trump seemed to have them on speed dial.  For him, there was no such thing as bad publicity.

That's why I'm concerned. When he loses the election, and he almost certainly will, he might make things ugly. If a president does not think there is such a thing as bad publicity, he has little incentive to behave well.

That makes a clear contrast with others in modern history. For all their flaws, Al Gore in 2000 and Richard Nixon in 1960--when he faced John F. Kennedy—recognized that close races had been snatched away from them in unfair circumstances.

Gore lost an election decided in the Supreme Court, even though the Constitution makes no provision for the Court’s involvement in deciding presidential elections.  Nixon had been hurt by the fraud of the corrupt Democratic machines in Chicago and in running mate Lyndon Johnson’s home state of Texas.

However, both defeated candidates had enough sense, to exit the scene with some of their dignity intact.  Gore began a new career as a climate activist.  In private, Bill Clinton had dismissed Gore as someone who should have been a professor.   Gore practically became one, teaching a nation about the perils of climate change in his film, “An Inconvenient Truth.”  The film was structured like a lecture, complete with graphics that looked an awful lot like Power Point.

After losing the presidency in 1960, Nixon ran for governor of California in 1962.  After losing, he held a press conference where he declared, “You won't have Nixon to kick around anymore, because gentlemen, this is my last press conference.”  Remarkably, six years later ran for the presidency again.  Repackaged by his handlers as a “new Nixon,” he had become savvy about his mannerisms on television. He began the Republican practice of using “dog whistles” such as welfare and crime to appeal to voters.  He won a close race against Johnson’s liberal Vice-President, Hubert Humphrey in 1968, and was elected president in 1968.

While historical analogies are never exact, the current election reminds me of the contest conducted in 1824.  War hero Andrew Jackson had the most popular votes, and more importantly, the most electoral votes.  However, with four candidates in the race, he lacked the Electoral College majority required in the Constitution.

As the Constitution requires, that threw the race into the House of Representatives.  In the House, members caucused with fellow Congressmen from their state, in order to arrive at a single vote.  This opaque and illogical system confused citizens in 1824, and still poses challenges for civics and history teachers today.  In the House, one of Jackson’s opponents, John Quincy Adams, prevailed.  Jackson charged that Adams’s win was the result of a “corrupt bargain” between Adams and the influential Congressman Henry Clay.  His suspicions were, in his view, confirmed when Adams named Clay as the Secretary of State.

There has never been hard evidence for a “corrupt bargain,” between Adams and Clay, but Jackson never let go of the idea.  Jackson’s combativeness would later be an inspiration to Donald Trump, who has named Jackson as his favorite president.  Trump doesn’t seem bothered that Jackson was a slaveholder and Indian killer, but that is a subject for another day.

Unlike Trump in 2020, Jackson had more chances for a future Presidential bid:  he was still a national hero for winning The Battle of New Orleans in the War of 1812. Further, as a man in his fifties, he could run again.  So he complained loudly, but he behaved reasonably.

Today, the country is on track for the biggest electoral turnout in a century. Still, we should be ready for the temper tantrum Trump will throw if the country chooses Joe Biden.  After all, he complained mightily against the vote totals in 2016, when he won.  We do not need experts to tell us he’ll refuse to accept the results, citing voting by mail as “rigged”   He’s told us that this will happen and we should take him at his word. The president’s stance is also ironic:  by ignoring the virus, he has created the conditions that make voting in person dangerous for so many of us.  Hopefully, the election will be a landslide, and the results decisive. But both campaigns have already lined up lawyers. At the very least, we should be prepared for several weeks of uncertainty, even if Biden wins a solid victory.

The only time the peaceful transfer of power has failed was in 1860, and the result was the Civil War.  That will not happen this time. Trump’s support beyond his base is small.  Some Republican politicians are already looking at the poll numbers for Biden and the U. S Senate, and are backing away from Trump.

Most notably, Kentucky's Senator, the Majority Leader Mitch McConnell, has refused to negotiate a new economic bailout package before the election, a move that damages Trump.  Further, McConnell has spoken publicly about his unwillingness to visit the White House given its lack of protection against the coronavirus.  In spite of McConnell having the temerity to criticize him, Trump has shown remarkable restraint in not returning fire on Twitter.  Trump’s Twitter feed reflects the balance of power between the two men, which is tilting away from Trump.

An ambiguous election result would be fought not only in courts of law, but also in the court of public opinion.  McConnell might lack Constitutional power to help Trump after the election, but the Supreme Court in 2000 lacked Constitutional authority to decide the election, and ended Al Gore’s campaign.   That decision was such a mess that the Court itself said it should not apply as precedent.

In 1860, the failure to transfer power peacefully resulted in Civil War.  However, Abraham Lincoln, while no abolitionist, often stated that he thought slavery was wrong and should become extinct.  He and the Republican Party represented an existential threat to the slave system.  In contrast, Joe Biden has spent a long career trying mightily to threaten no one.

If Trump loses the election, he will have little choice but to leave office peacefully.  The transition may not be a smooth one, but it does not have to be easy.  It just needs to happen.  If it does, we will reminded that our country’s democratic traditions can be stronger than a demagogue. Even if it takes a couple of weeks to count the votes, a fair election will give us a good reason to be grateful this Thanksgiving.