Blogs > There's No There There > Trumpism: At Home & Abroad 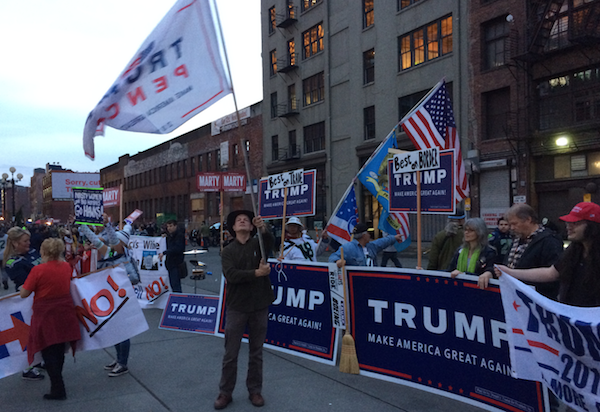 I wonder how many Hillary voters ever talked with Donald supporters. I did, though only accidentally. While I was a patient in the ER of a local hospital my Cat-scan operator told me without prompting that he was voting for Trump, a view seconded by a middle-aged woman awaiting her turn at the machine. Days later, in a local supermarket, a man I had never met commented favorably on my NY Mets cap and then explained why he, a self-described independent and moderate Republican, was pro-Trump. And a guy working in my kitchen explained his pro-Trump vote. All of them were white, employed and educated. One had a college degree and another expressed sympathy for the large number of African Americans killed by cops. Despite the anti-Semitic, racist and homophobic sentiments expressed by some pro-Trump voters, the people I talked with weren't KKK, neo-Nazis, rednecks or bigots. The thread that ran so true between them was a deep loathing for Hillary that "passeth understanding."

They had other complaints, now aired everywhere as the media and pollsters are obsessed with how they could have been so wrong.  Clinton was -- unfairly -- the centerpiece of Trump voters who apparently believed an arrogant, corrupt, indifferent and privileged America on our east and west coasts had cut them out, sent their kids to failed and endless wars, which represented a "massive disconnect" between Americans, as J. D. Vance, the Appalachian-born author of the first-rate book Hillbilly Elegy aptly put it. Many believe that working people, once reliably Democratic, had been abandoned. Writing to his supporters, Bernie Sanders echoed this. "The declining middle class is sick and tired of establishment economics, establishment politics, and the establishment media" and the post-Trump Democratic Party must again become the party "that working people know will work for their interests."

The people I met rarely if ever spent time reading the NY Times, New Yorker, New York magazine or bothered with the PBS's sophisticated Nightly Reports, all of whom were clearly on Clinton's side. Newsweek's pre-election cover was devoted to "Madame President" and subtitled "Her historic journey to the White House" -- the magazine said it was mistakenly sent out -- which seemed, however, reminiscent of Liberty magazine calling the 1936 election for Alf Landon rather than FDR or the Chicago Tribune's headline reporting Dewey's victory over Truman in 1948. Whether by design or ignorance, or just plain carelessness, virtually all our mass media walled itself off in a self-inflicted cocoon and convinced themselves and us that Trump was a certain loser and no more than a lying, sexist, tax-cheating, badly informed rogue.

But like it or not he's the next President and Newt Gingrich, Chris Christie, and Rudy Giuliani (maybe Sarah Palin too?) now get to ride in limos, fly free  in chartered planes, and flash their uncompromising views across the world while their congressional pals try to end Obamacare, abortion, forget about holding Wall Street accountable for its many sins and also privatize Medicare and Social Security, while ignoring climate change and selling off  federally owned and protected western lands, undeterred by  a castrated, traumatized and divided Democratic Party.

While our pet domestic policies are sure to take a sharp rightward hit I hope we may see major changes in foreign affairs. Trump, the heretic and outlier, has challenged the strangulating effect of American Exceptionalism, regime change and promiscuous use of military force. He has questioned NATO's moves to the Russian border (he once asked, "Wouldn't it be nice if we could get along with Russia?") and was subjected to McCarthyite attacks by Clinton and her sycophants for being Putin's boy toy.

In contrast, Clinton offered nothing but a renewal of a new Cold War in Europe and East Asia with her talk about a no-fly zone over Syria, which many in the Pentagon think risks a war with Russia, and her incessant attacks on Putin, the tough guy who runs a very large country with thousands of nukes. Obviously, we've always needed a Public Enemy, the better to mask our needless wars. But in the campaign she offered no vision and no hope beyond endless wars in East Europe, the Greater Middle East and East Asia, alienating many of Bernie's supporters and, I hope, as well the  pro-Trump people  with whom I spoke.

Still, does Donald Trump, a foreign policy amateur, really mean it when he countered Clinton's hawkishness by questioning our role as self-appointed world policemen?  Does he have any feeling for Eisenhower's warning about our military industrial complex? Will he recruit allies and form coalitions to fight alongside of him to resist Washington's bellicose neocons and influential home front warmongers, a critical press and pundits?  Or will he be overwhelmed by the pressures brought by our hawks, empire-builders, lobbyists and subsidized think tankers and cave while submissively accepting the same old failed policies of presidents who have preceded him?